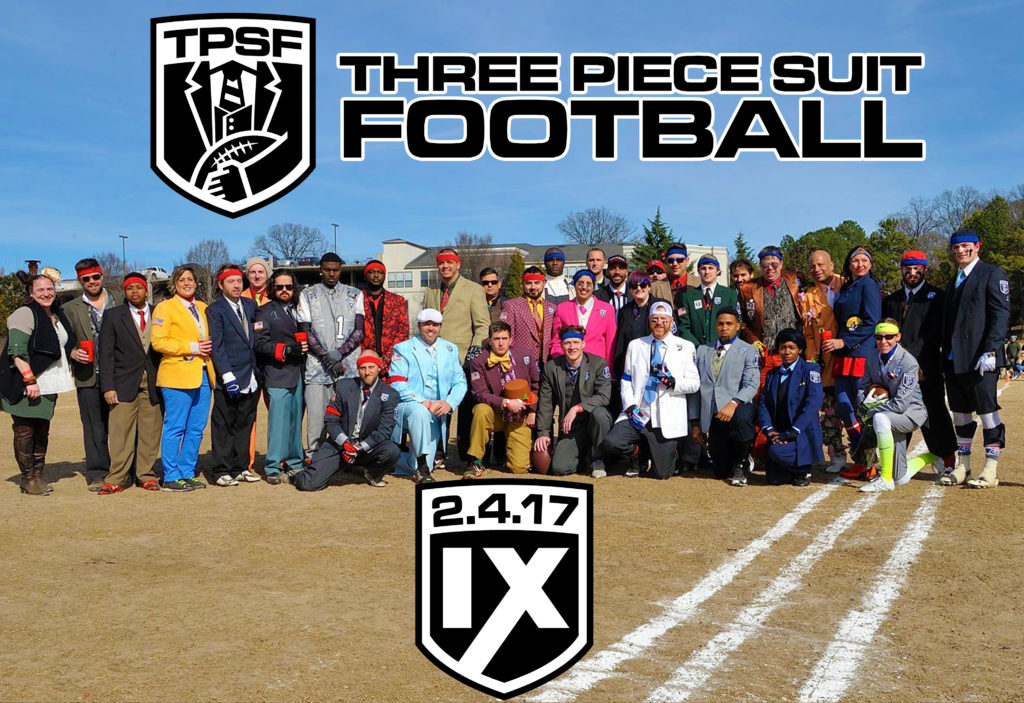 We are proud to announce that on Saturday February 4th, at the Three Piece Suit Football IX Charity Festival, we raised $8,077 to support Pets for Vets – Georgia! This is the largest amount we have raised at a single event in TPSF history!

The game itself started off as a defensive battle, with the Blue team leading only 6-0 at halftime. In the second half, the Blue team had some key runs and scores by TPSF Rookie Sidney Smith that helped them seal the win over the Red team, 26-6. Sidney Smith was named the game MVP for his valiant (and colonial) effort. Shannan Edwards was awarded the game ball for her all her efforts both on and off the field, as well as winning the Best Dressed Trophy for her Falcons-themed “Rise Up” suit. Additionally, rookie Aren Dale won the “Got Lit Up” trophy for a hit delivered on him by Reuel Murray.

In addition to the game, there was lots of great entertainment for the fans and spectators. For the fourth year in a row, the Greater Atlanta Dog and Disc Club put on the halftime show with their high flying acrobatic disc dogs! Wasted Potential Brass Band provided live music and entertainment, marching the players out on to the field with TPSF mascot Ronnie Peaches keeping everyone entertained. Additionally, WPBB singer Mandi Strachota belted out a powerful rendition of the National Anthem. Sherri Vallee also provided free face painting throughout the game for kids (and adults), while JB Jams rocked out some great tunes and in-game entertainment by Judy and Sue! Finally, who can forget the always entertaining banter and play-by-play from our Game announcers, Troy and Will!
Monday Night Brewing and Tito’s Vodka provided drink options for players and fans alike, with all proceeds from these sales directly supporting Pets For Vets! Additionally, TPSF sponsor Publik Draft House and other food trucks provided yummy options for spectators!
Finally, the biggest way TPSF supported the charity this year was through our 50/50 raffle and our gift card raffle. In the months leading up to the game, players and supporters alike sold $10 50/50 raffle tickets to support the charity — with the player/supporter who sold the most tickets winning the Most Charitable Award. Amber Hunter was named Most Charitable for selling the most 50/50 tickets, selling a record 142 tickets! We also raffled off over $2,000 worth of gift cards and prizes in between quarters with all of those donations supporting the charity!
For all the great shots from the event, be sure to check out our TPSF IX photo albums that are posted on the Three Piece Suit Football Facebook page. Also stay tuned for news on other upcoming events in both Atlanta and Boston throughout the year. And as always- Save the Date for TPSF X on February 3rd, 2018!

There are so many people we want to say “Thank You” to including, our finely-threaded players who put it all on the line during the game, the selfless volunteers who helped put on the event, our gracious sponsors who supported us, and the countless spectators that came out to this great charity event! It’s amazing to see how far we’ve come in nine years, and we are beyond excited when looking forward to our 10th annual game next year! THANK YOU!